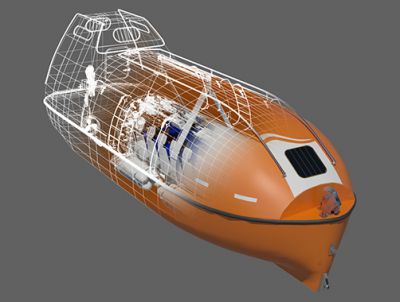 In February 2016, JFD won a multi-million pound contract to design and manufacture six SPHLs (four 18-man and two 24-man) as part of the saturation diving systems on board a new fleet of diving support vessels (DSV). Final testing of the first two 18-man SPHLs is due to take place before installation and commissioning on the first DSV. These lifeboats mark the first to be completed as part of a new partnership between JFD and Vanguard, based in Singapore.

The partnership combines JFD’s hyperbaric and chamber manufacture and design expertise with highly respected lifeboat manufacturer, Vanguard. This exclusive partnership leads the way for a new generation of hyperbaric lifeboats and integrated davit systems which are leading the market in terms of operational safety standards for saturation divers.

Giovanni Corbetta, JFD managing director stated:
“We are delighted with the progress of our first collaborative project alongside Vanguard. The project is on schedule and we are looking forward to delivering two advanced, high-quality vessels which will raise the safety standard of SPHLs globally, greatly improving the chances of a successful, safe recovery and decompression of the divers”.

JFD and Vanguard worked closely during the design and engineering phase, and the build programme for each element commenced simultaneously across all their global locations. Following the SPHL boats and davit systems manufacture at Vanguard facility in China and the chamber fabrication at JFD’s Australian, Korean and UK bases, the final outfitting is being completed at JFD’s LEXMAR facility in Singapore.

The SPHLs have been subject to continuous testing and DNV class build surveys throughout their manufacture to ensure compliance with the latest industry standards. FAT testing is due to commence with  the client and shipyard, which will involve pressure and leak tests, load and function tests and all other requirements mandated by Class, IMO and SOLAS.

The completed lifeboats will undergo speed and endurance testing in August 2017 before final acceptance by DNV and delivery to the client.

While the partnership with Vanguard is a new avenue for JFD, the company has a long standing pedigree of hyperbaric and chamber manufacture and design. Previous builds have included those within saturation diving systems onboard DSV’s Deep Explorer, Skandi Singapore, Skandi Arctic, Seven Atlantic and Skandi Achiever, to name a few.

Giovanni continued:
“We are very excited about the future of this partnership having just secured a further contract with Shanghai Salvage for the supply of two SPHLs for JFD’s prestigious 500m rated 24-man modular saturation system. They have just passed prototype testing and are scheduled for delivery Q2 2018.
“We have received extremely positive feedback from clients in regards to the venture. The two companies are leaders in their fields and share the same ambition to progress the safety of the subsea industry through well designed, high quality equipment.”