JFD, the world-leading submarine rescue and diving equipment company and part of James Fisher and Sons plc, has recently taken part in a major international submarine rescue exercise, Dynamic Monarch ‘17, which required it to demonstrate the NATO Submarine Rescue System (NSRS) capability, as well as provide training on various elements of the system. 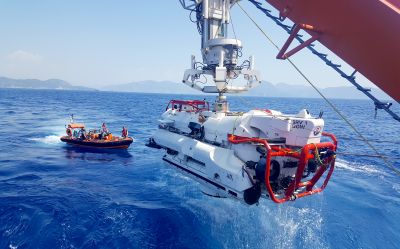 JFD is responsible for maintaining NSRS in a permanent state of rescue readiness for the NATO partner nations of France, Norway and the UK, to go anywhere in the world at any time. JFD has been an integral part of the UK’s submarine rescue provision since 1985, and has been at the heart of NSRS since it came into service in 2008.

The system is fully air transportable using a variety of suitable aircraft and is capable of launch and recovery in a significant wave height of up to 5m (sea state 6).  NSRS is designed to reach a distressed submarine in 72 hours from the point of alert.

Dynamic Monarch is one of the largest submarine rescue exercises internationally, occurring every three years and is designed to test international forces’ interoperability and ability to respond to submarines that have become disabled, anywhere in the world.  The exercise offers the chance to demonstrate multi-national submarine rescue co-operation and provides a platform for sharing knowledge amongst participating nations.

The exercise required JFD to fully mobilise the rescue system to Turkey.  The mother ship (MOSHIP) embarkation and mobilisation took place at King George V Dock in Glasgow, with the system sailing to the exercise point in Turkey.  The main exercise phase commenced on 8 September and was executed over a two week period, in which various submarines took part in the simulated rescue operations.

The objectives of the exercise covered Transfer Under Pressure (TUP) operations and a series of demonstrations of submarine rescue vehicle (SRV) ‘mating’ with a variety of submarines. A total of nine mates took place during the exercise. There was also the provision of training opportunities to JFD operational personnel on each element of the system, as well as to NSRS Partner Nation personnel in areas such as rescue chamber operations and medical support functions, throughout the exercise process.

Upon completion of the exercise, the MOSHIP transited back to the disembarkation point at King George V Dock, where the equipment was removed from the vessel and returned to HMNB Clyde for restoration works to maintain ‘Rescue Readiness’ status.

“Dynamic Monarch ’17 gives JFD the opportunity to demonstrate the world class capability that is provided by NSRS.  The highly trained operational team delivered further confidence to the participant nations that in the event of a real emergency, the NSRS Rescue System can mobilise and participate in a successful rescue.”

JFD has undertaken several successful NSRS rescue exercises over the previous two years of service, including Northern Sun ’15, Golden Arrow ’16 and Northern Sun ’17, which shows the continued commitment to the NATO Submarine Rescue System as well as the recognition of responsibility to assuring the operations team is fully trained in all aspects of a safe rescue.