JFD, the world-leading subsea operations and manufacturing company, is pleased to announce the planned expansion of its National Hyperbaric Centre’s fixed hyperbaric reception facility (HRF) from an 18-man to a 24-man system.

Housing the only land-based saturation diving system in the UK, the National Hyperbaric Centre (NHC) has worked in collaboration with North Sea diving contractors to help ensure the safety of saturation divers in case of an emergency over the last 28 years, successfully providing a comprehensive 18-man emergency hyperbaric reception facility.

In response to larger diving support vessels coming into operation in the North Sea, the expansion will ensure NHC retains its leading position in the diving industry, with the ability to support and facilitate the arrival of the new generation 24-man self propelled hyperbaric lifeboats (SPHLs).  It will be one of only a few facilities in the UK that is able to support the reception of larger SPHLs and benefits from being connected to a dedicated DMAC 028 (Diving Medical Advisory Committee) compliant medical chamber.

“JFD is delighted to announce that a major operator has already signed a contract for the provision of 24-man reception capability. NHC has retained a successful reputation as a highly capable HRF facility over many years, and so, JFD is happy to invest in developments which will enable the centre to continue to support its clients as their needs develop.”

Included in the expansion is the design and manufacture of a new hyperbaric module which consists of a transfer under pressure (TUP) chamber and spool piece which will provide a critical link between the 24-man SPHL and the NHC’s decompression chambers. The TUP will be contained within a steel support structure (Support Module) with a bespoke cradle which provides alignment, support and portability for the 24-man SPHL. The NHC building will also be extended and its overhead crane handling capabilities enhanced so it can accommodate the larger 24-man SPHLs’.

The current life support systems within the NHC are designed to support a maximum occupancy of 18 people. As part of the extension, the existing decompression chambers will be adapted and removable modules will be available to accommodate a maximum of 30 people during the medical treatment and decompression process, providing a facility suitable for treatment of the most complex of diving-related medical emergencies.

All the above works will be designed and delivered in accordance with IMCA guidelines and pressure boundary works will require Lloyds Register Certification.

Once completed, the expansion will result in the NHC being one of the most capable and adaptable reception facilities in the UK supported by the most knowledgeable staff in the world.

The enhanced capability is further strengthened by the addition of a portable 18-man HRF which was delivered to NHC early November. As part of its commitment to subsea safety, JFD has positioned itself as the centre of excellence for hyperbaric rescue facilities by offering a comprehensive service which can support operators across the whole of the North Sea. 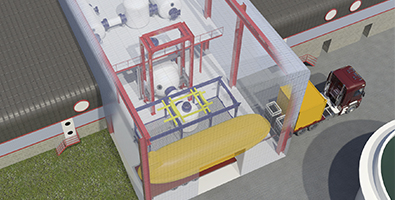